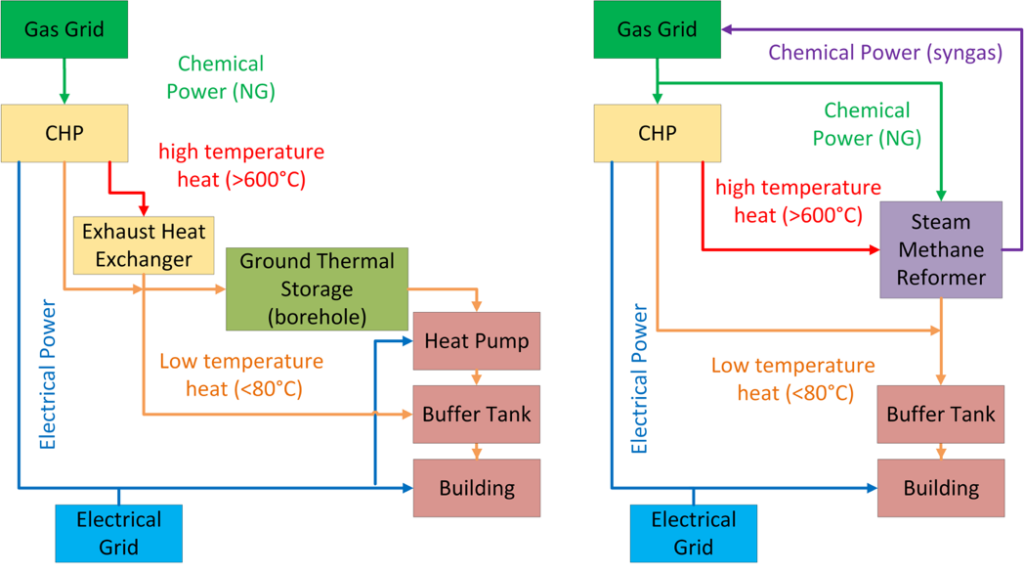 In concept 1 (on the left) a ground thermal storage increases the flexibility of the CHP almost infinitely, while concept 2 (on the right) mainly focuses on increasing the exergy efficiency of the system by making direct use of the high-temperature heat in a steam methane reformer.

Combined heat and power (CHP) plants convert chemical energy, stored in either fossil or renewable fuels, into thermal and electrical energy. They can be started up quickly and are highly efficient and hence have great potential to contribute to the stability of the future energy system based largely on fluctuating renewable energy sources. The flexibility of a CHP plant rests on its ability to respond quickly and decouple its operation from local heat demand and is thus strongly linked to the installed thermal energy storage (TES) capacity. Conventional combustion-based CHP plants also convert valuable high-temperature heat in the exhaust gas to low-temperature heat for domestic heating demands, thus significantly reducing their exergy efficiency. It is the overall goal of Task 3.5 to address these issues and increase both exergy efficiency and flexibility of mCHP plants on the sub 10 kWel scale.

To this end, two options for CHP system expansion are investigated in simulations (see Figure 1). The more promising of which is further tested with hardware in the loop (HIL) experiments on the ReMaP platform. Although the combination of CHP and borehole heat exchanger (BHE) significantly increases flexibility through large storage capacity in the ground, simulations show that high thermal losses prevent any effective operation at this small scale. Over the course of a one-year simulation, a steam methane reformer (SMR) CHP system promises to be more flexible (increased degree of self-sufficiency by 14.0 percentage points) and exergy efficient (increase of 2.9 percentage points) than a conventional system. An SMR-CHP concept is therefore to be favoured against the BHE-CHP concept. 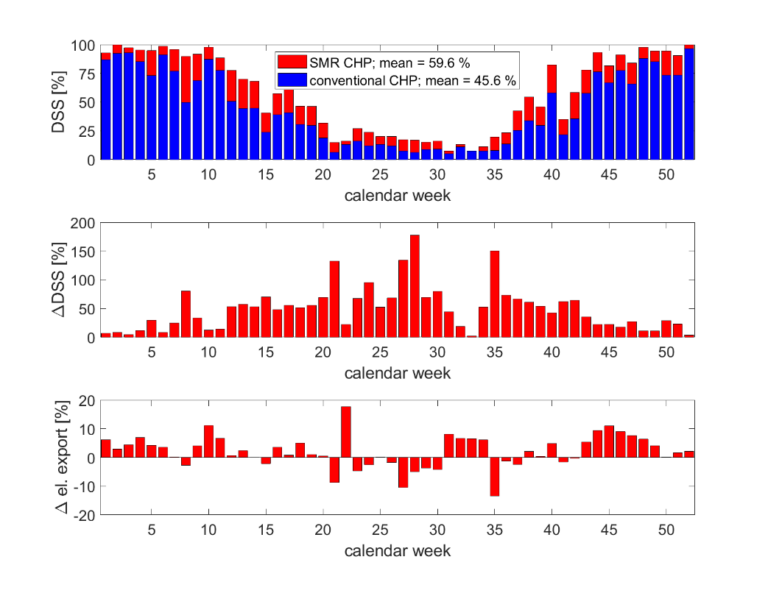 A prototype SMR-CHP plant is sized, designed, and built based on an existing mCHP plant. First experiments show that the chosen SMR components are not able to withstand the pulsations of the exhaust gases in combination with temperatures up to 750°C. Three constructive and operational improvements of the system are identified during the experiments:

A standard heat-led control concept for conventional CHP systems is improved by also considering electricity demand by biasing the dispatching towards economically favourable conditions and using linearized models to optimize control parameters. For the conventional and the SMR-CHP system, the operating costs are reduced by 1.9% and 2.1% while the degree of electrical self-sufficiency (DSS) is increased by 9.1% and 2.9% at the cost of reducing the exergy efficiency by 0.6% and 1.3% respectively. Both hardware and software components are integrated into the ReMaP platform (Simulation Framework) successfully. Subsequent HIL experiments with real demand data from the NEST building at Empa show that the optimized hybrid control concepts are working in practice when applying a moving average filter to the electricity demand.